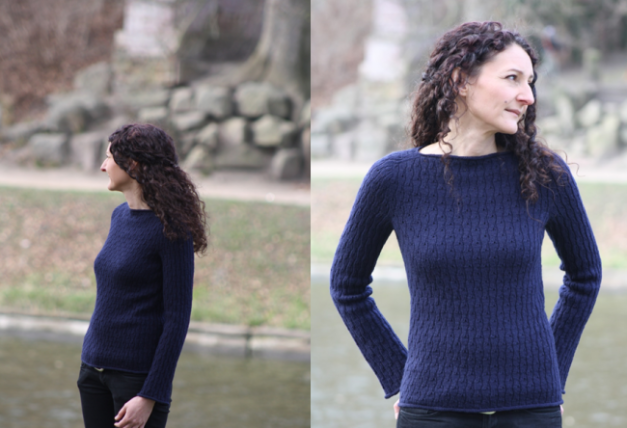 Finally I can tell you about this awesome sweater! It´s been over a year that Brandie Brunner (check her out on Ravelry: beepb), my friend and tech editor, and I started working on this design together. It was the first project where Brandie was taking part in the design process. And what can I say, she did not start slowly! She came up with this incredibly beautiful stitch pattern. It´s hard to say if it´s ribbing or lace, it´s a mix of both. The combination of knit and purl stitches means that there´s no curling, which is super awesome. And the eyelets create a stunning night-sky effect, it looks as if the eyelets were stars or distant galaxies. It´s almost poetic.

The most wonderful part about the stitch pattern is its overall look, there seem to be streams and streams of water running together. It paints a mesmerizing pattern, just like raindrops that land on a pane of glass. I really believe that Brandie is a natural knitting genius for coming up with it. 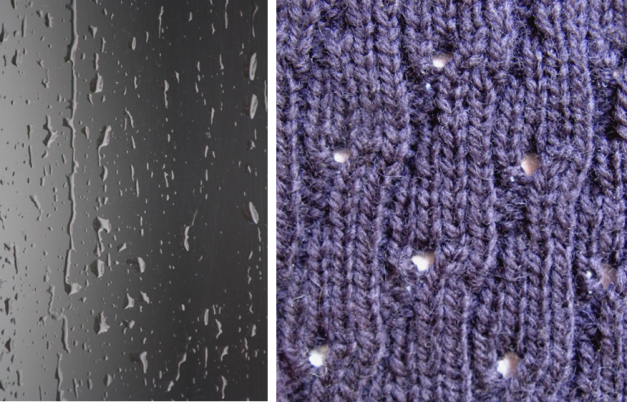 Brandie and I discussed every detail of the sweater, e-mails were sent to and fro accross the ocean. It was a lot of fun. I am so used to working on my own that I almost forgot how inspiring and rewarding a cooperation like that can be. 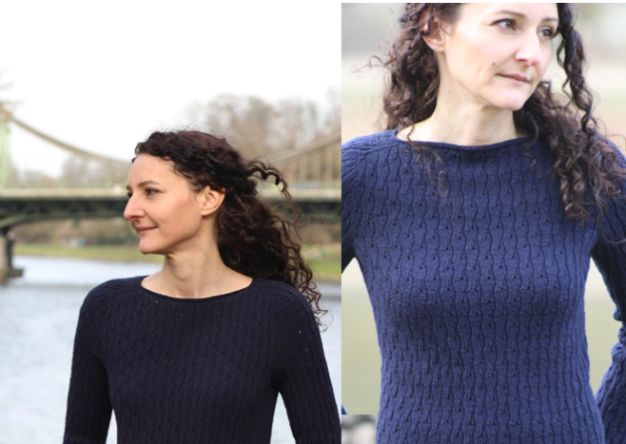 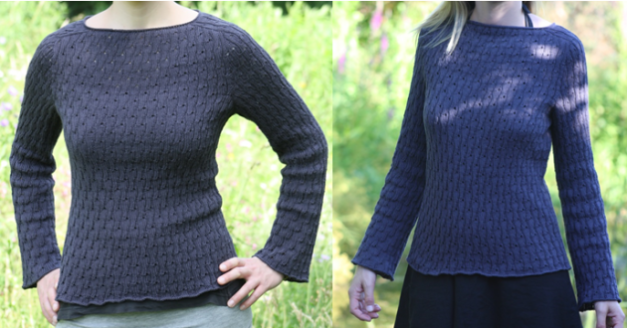 Also, this stitch pattern has a great elasticity, you would never have guessed that the sweater to the left is modeled on a 39 in bust while the same sweater is shown to the left on a 34.5 inch bust. It´s almost impossible to knit up the wrong size with this sweater.

Here´s another, and even more perplexing example of this: This sample, knit by Brandie with Cascade Yarns Ultra Pima, is modeled on a curvy 36 inch bust on the left, on a flat 36 inch bust in the middle and on a 45 inch bust on the right. It´s just fascinating how this works, isn´t it?

The first sample was knit with Golf from Lang Yarns, which consists of 100% mercerized cotton. So this shows how the fibre content also changes the look of the sweater. I have a hard time desiding which sample I like more, the cotton prototype or the one with the actual yarn we used for the pattern, Knit Picks Palette, 100% Peruvian highland wool, which is lighter and fluffier than the cotton. I enjoyed working with that yarn a lot, and the colour just about perfectly matches the image I had in my head. Brandie and I are very grateful that our sweater is part of KnitPicks´ outstanding Independent Designer Partnership Program. They have great patterns on their website, if you are not familiar with it, you really should check it out! Plus, they do have a large variety of yarns, you´ll find the right one for any size of the sweater in their collection, which is awesome in and of itself. The KnitPicks photographer was so taken by our Rivulets sweater that she took some pictures, even though it wasn´t planned. You can imagine that we are proud. And the model is gorgeous.

ther detail about the construction of this sweater that I´d like to mention: Coming up with a seamless way to knit this very intricate pattern was a bit of a challenge. We had to find a way to let the stitch pattern at the shoulder seams naturally flow into the stitch pattern of the sleeves. We resolved this by working saddle shoulders. The two pattern repeats of the saddles function as a baseline for the sleeve increases – it really does help the knitting develope organically as you go.

The pattern comes in written and charted format, so that you can choose which ever directions suit you best. As usual, you can find it on Ravelry as well. Enjoy! 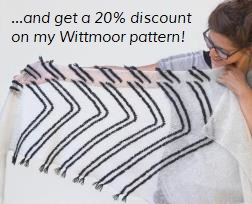 Knit along with us!